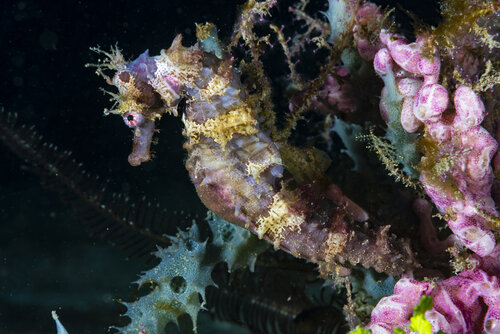 An amazingly colourful Hedgehog seahorse (Hippocampus spinosissimus). You can tell that it is a H. spinossisimus by the spines along it's abdomen and the spiny coronet. Photo by iNaturalist user francescoric.

This lovely sea creature is a Hedgehog seahorse (Hippocampus spinosissimus) - it was photographed off the coast of the northern Philippines by iNaturalist user Francesco Ricciardi. The Hedgehog seahorse is frequently found on corals and sea sponges, as well as the sandy bottoms of the ocean where they  feed on small crustaceans and other planktonic invertebrates. Unfortunately, their choice of habitat makes them more susceptible to bottom trawling, a harmful fishing practice that sweeps up the seafloor and leads to the destruction and loss of so much marine life.

To overcome the pressures placed on their habitats and populations, we must demand an end to:
• bottom trawling – the waste of life is atrocious
• harmful subsidies – we are paying to keep unprofitable fisheries afloat
• illegal, unreported and unmanaged fisheries
• illegal wildlife trade